How do you get someone to pay hundreds of dollars for an inferior product, when most people already have a better one in their pocket?

That’s the problem facing carmakers trying to sell built-in navigation systems when superior alternatives such as Apple’s Maps, Google Maps and Waze are available for free to anyone with a smartphone — which is almost everybody.

Most in-dash navigation systems aren’t as smart as your phone, perhaps lacking traffic data or point-of-interest information, and stuck with clunky update procedures. And solutions like Apple’s CarPlay and Android Auto, which essentially mirror your phone on the screen of your car’s console, force carmakers to cede an important driver experience to third parties.

But improvements are on the horizon. In-dash navigation systems will be getting smarter, not just learning your preferences and using data connections for timely updates, but crowdsourcing sensor information from connected vehicles to assess traffic problems and road conditions — even guiding you around a newly formed pothole.

And next-generation navigation systems are not just an important way for carmakers to interact with drivers. They are also a crucial step in the development of autonomous vehicles. 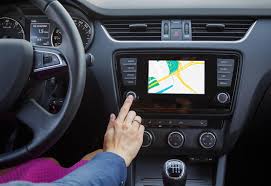 Garmin and TomTom — companies that became best known for GPS units that sit atop the dash — are also major providers of mapping data and in-dash user interfaces to car manufacturers.

TomTom is “collecting data on a large scale, learning how to aggregate it to spot trends in traffic for autonomous vehicles,” its chief executive, Harold Goddijn, said. “All the car manufacturers will need to share that data.”

But for now, many carmakers bundle their navigation systems with other features, forcing buyers to take one in order to get something else they actually want.

Even with their limitations, in-dash systems have some advantages. They’re convenient and uncluttered. There’s no need to find a way to suspend a smartphone and its dangling charge cable in the middle of the instrument panel. They use a vehicle’s built-in controls, and there’s no danger of running out of power.

But in-dash systems typically store data locally, meaning information may be inaccurate and outdated. Upgrading such systems can be difficult or even impossible. Even when it can be done, it can be a multistep process of downloading new data to a flash drive and then transferring it to the vehicle.

In a recent test of a 2015 model-year car, the built-in navigation system had no listing for a winery that has been in business for 15 years. Both Apple Maps and Google Maps found it in a split second. That’s because smartphone navigation apps are cloud based, continually updated with new information.